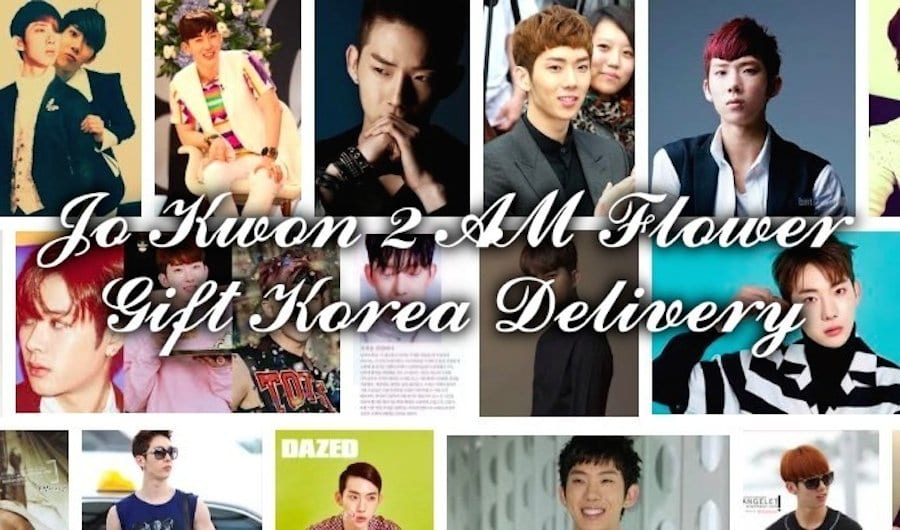 We had to do an update for our Flower Gift Korea delivery post to Jo Kwon because we just think he is just genuinely such a nice guy, and we wanted to share another delivery we made to him for a fan. But before we share about the delivery experience, it is important to know that Jo Kwon has a very very busy schedule, yet he always does his best to appreciate his fans and often publicly shows his gratitude on his instagram. You can follow Jo Kwon on Instagram @kwon_jo We at Flower Gift Korea really admire how down to earth he is and are always honored to connect fans to him and vice versa.

So we also made another delivery to Jo Kwon, but this time, it was to his Cereal Cafe/Restaurant, “Midnight in Seoul”. A fan wanted to send some gifts to Jo Kwon on his birthday, so we at Flower Gift Korea did what we could to help connect this fan to Jo Kwon in South Korea. In the end, the fan ordered a “White Knight Flower Bouquet”, which is a very popular bouquet style given to men, a snack box gift, a teddy bear, and a chocolate bouquet.

Here is what was prepared: 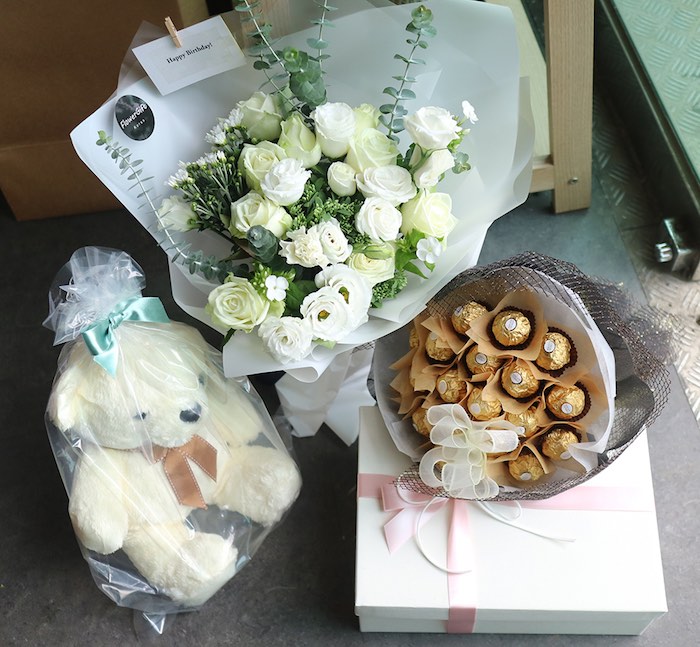 And this was our first time visiting Jo Kwon’s cereal store in Gangnam, Seoul, South Korea. But it was easy to find and wasn’t too far from our flower shop in Seoul. Here is what the building looks like from the outside. And you may miss it if you visit in the morning if you aren’t careful because the sign is on the left side of the wall. But it’s probably really easy to spot at night. 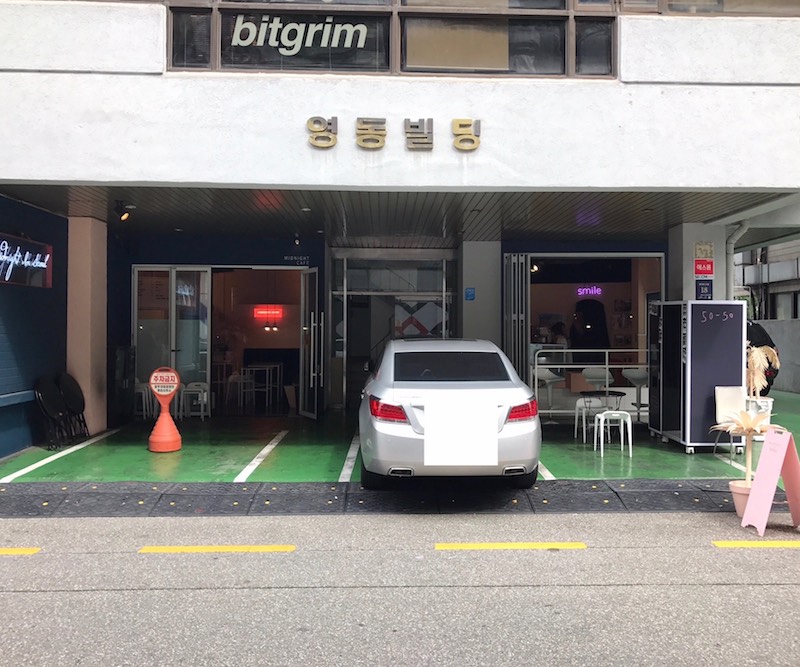 And we went inside to check it out: 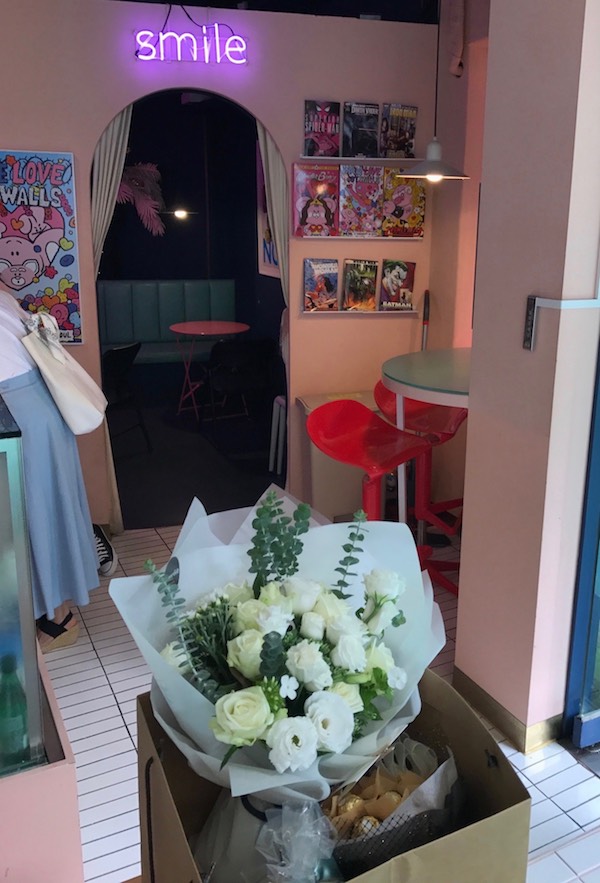 Here is some of the cereal they had available: 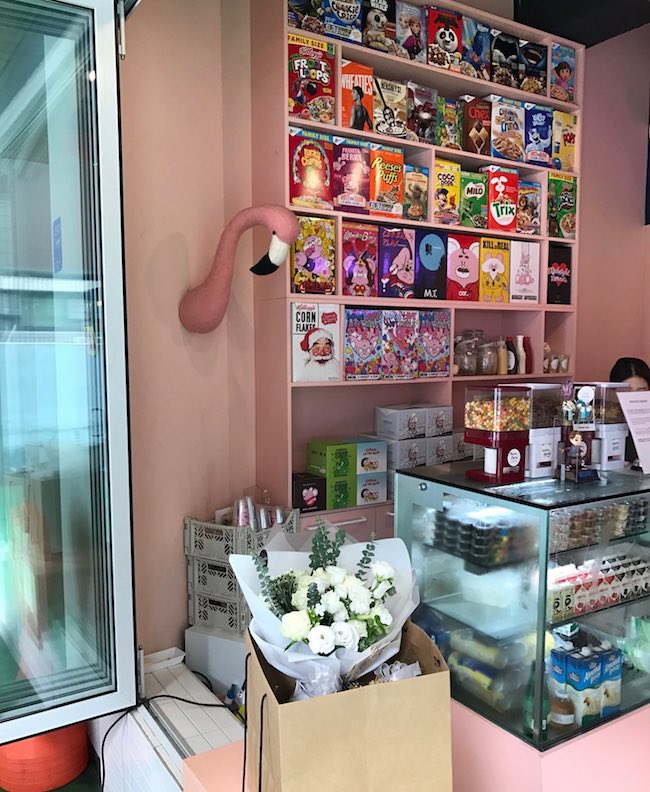 And some souvenirs you can purchase at the shop: 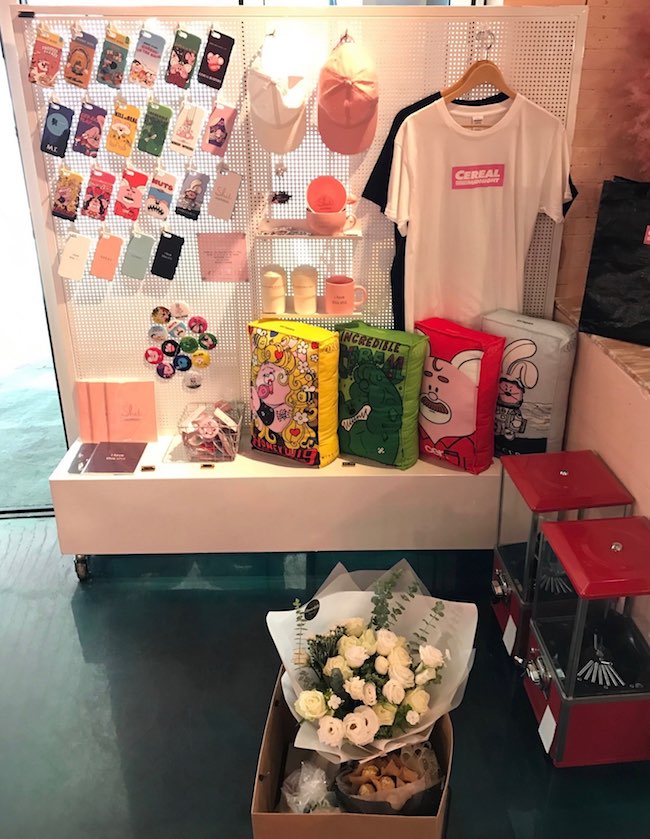 The cereal shop is a really cute boutique shop and is definitely worth a visit if you are in Seoul, South Korea, and especially if you are a fan of Jo Kwon. We at Flower Gift Korea do our very best to take photos of our celebrity deliveries to idols, artists, and actresses/actors. We are usually successful, as you can see in the photos above, but some places are strict and don’t allow for photos. But Jo Kwon is too nice, so yeah, we got some nice photos ^^

Best of all, Jo Kwon publicly thanked the fan who sent him these gifts. Here is a screenshot of his Instagram: 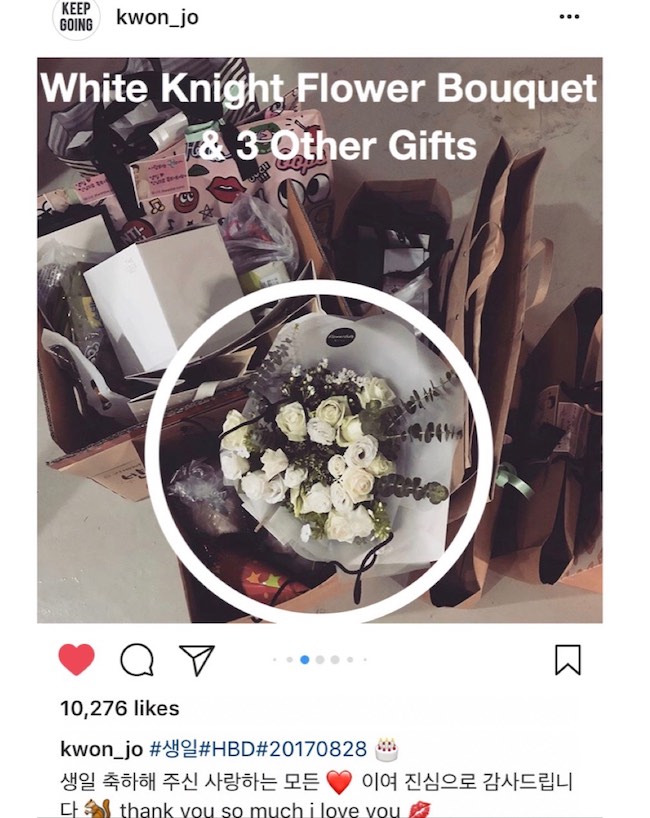 And if you read this blog post in the past, then you would know that we made a delivery to Jo Kwon at a musical he was performing in.

The name of the musical was “Evil Dead” and was playing from June 24th, 2017 to September 17th, 2017. The musical he was a part of had a lot of other popular celebrities acting in it like Kim Dae-Hyun, Kang Dong-Ho, Seo Ye-Rim, and many others. The musical was held in the “HyeHwa” area near “HyeHwa” station and where “DaeHangNo” street is. This area is very famous for the many theaters there. These theaters are where most kpop and kdrama celebrities get their start. And many celebrities continue to act in musicals and plays in this area for many reasons, the main reason being that they just enjoy doing it.

Here is the building where the musical was playing, “Uniplex”: 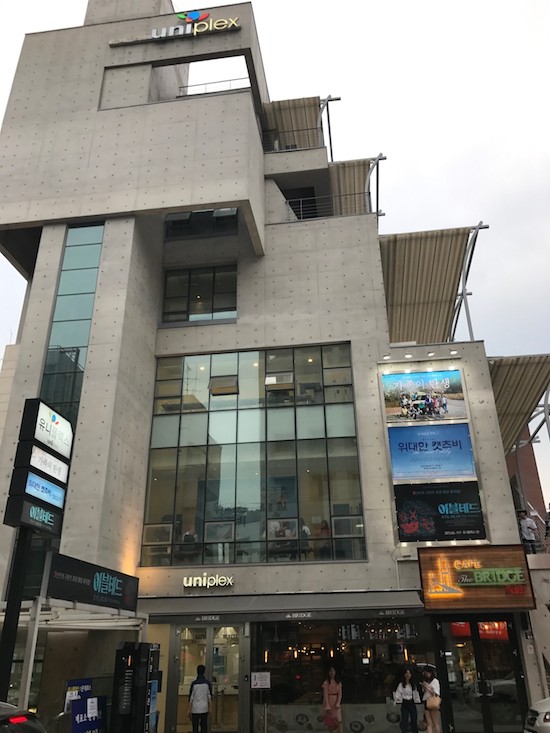 And this is a shot of the entrance to where the actors all hang out: 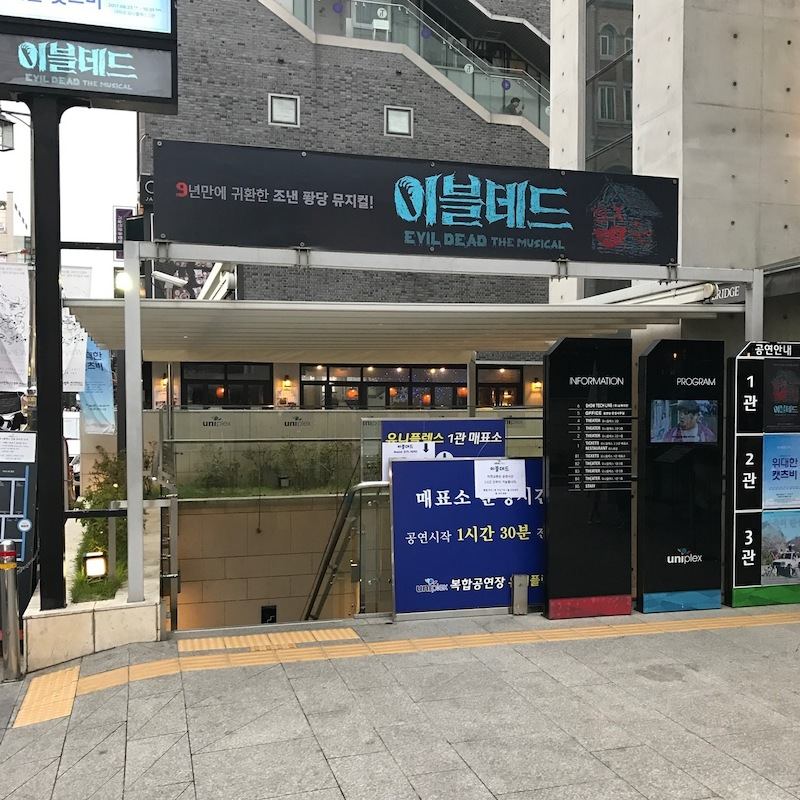 Here is a photo of the flowers we delivered to Jo Kwon from 2AM, who is a famous Kpop celebrity in Korea: 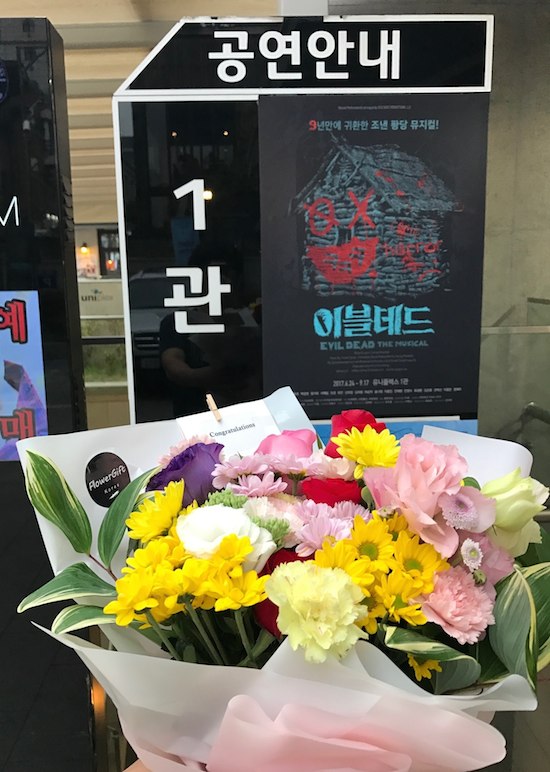 We made the delivery during the weekend, so we didn’t have any store hours. And usually when we deliver flowers to celebrities at theaters, we just leave the flowers and gifts with a staff member or at the front desk with the other presents (Unfortunately they do not let you get near the celebrities). Most of the Korean celebrities receive a lot of gifts at their shows, so we didn’t expect anything special to happen. But then we saw an instagram post made by the fan who ordered the gift, we were a little surprised. Here is the post: 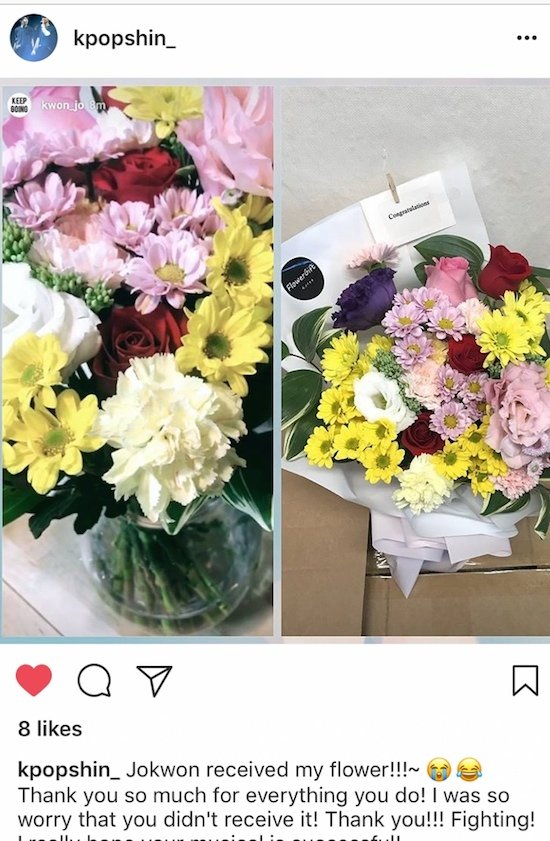 Jokwon actually received the flowers! I knew that he would receive the flowers, but how was the fan certain that Jokwon received the flowers Flower Gift Korea made for him. So we checked Jo Kwon’s Instagram and we didn’t see any posts. So we checked his instagram story and there it was!. Wow, I didn’t think JoKwon would take the time to share the flowers we made for him on his instagram. It was truly an honor and we at Flower Gift Korea were ecstatic! Here is another shot of our flowers in front of the musical sign: 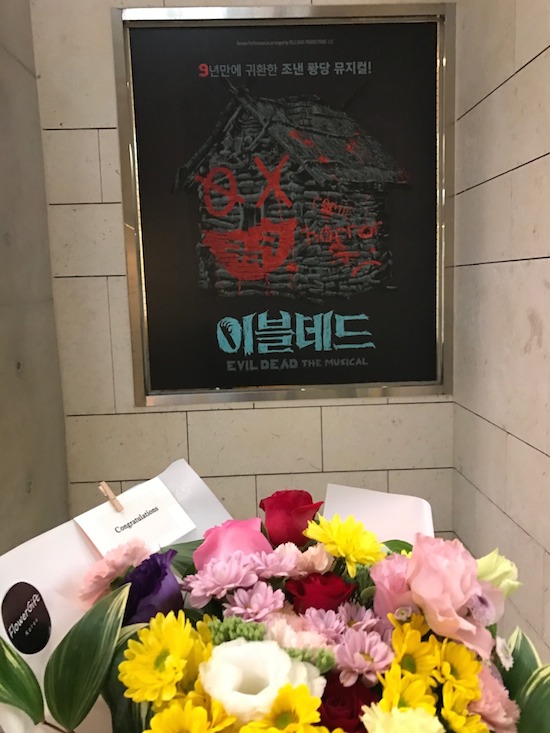 And then Jokwon actually liked the post the kpop fan who sent the flowers made! Wow, Jokwon was interacting with his fans! Even though he has more than 1 million followers on Instagram! That shows great effort and a lot of Korean celebrities wouldn’t have done that for their fans. But I guess Jokwon is just a super nice guy. : 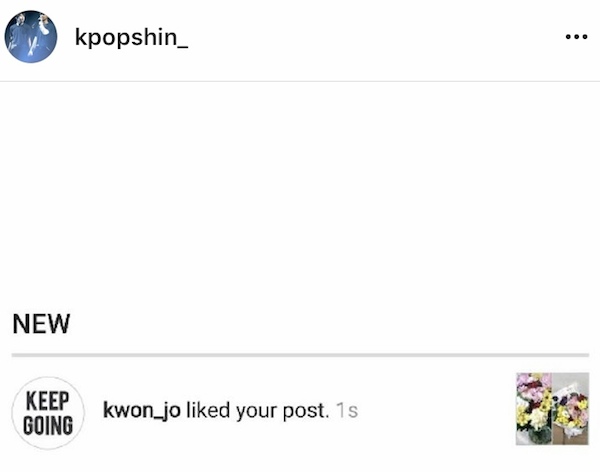 We were so happy with the experience, so we also made our own instagram post about the flower delivery to Korean pop star Jo Kwon: 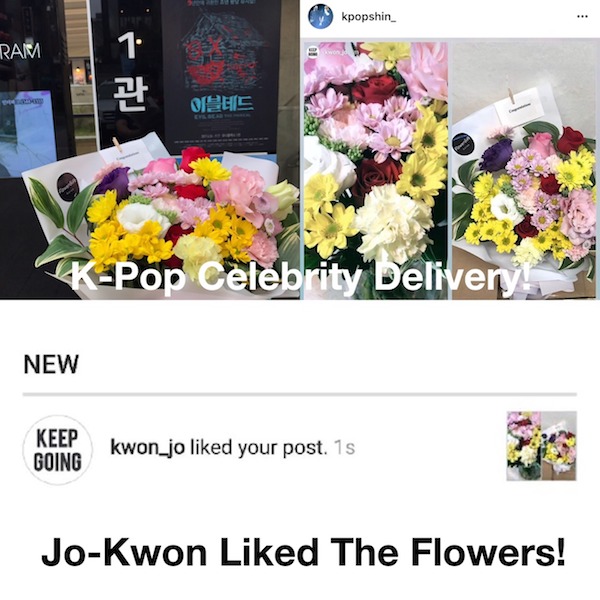 It was fun preparing the flowers and delivering them to Jo Kwon. He definitely does his best to connect with his fans. And true story, I used to see Jo Kwon time to time when he was with 2AM. No, we aren’t friends or anything, well not yet at least, but I actually used to exercise at the same fitness club as the members of 2AM in the year 2010 (a long time ago). And Jo Kwon was always really polite and well mannered when interacting with people in the gym. Just a really nice guy. Yeah, you can tell that I’m a fan of Jo Kwon. He is a pretty talented celebrity, but more than a fan of the celebrity Jo Kwon, I’m a fan of the person Jo Kwon. *thumbs up*